Last Monday 5th November all Marinada’s secondary students went to see a theatre play in English in the big hall of our school.
The play was called Dracula and it was performed by a company of English actors. Dracula is an adaptation of the novel by Bram Stoker. It is about a young man called Jonathan who has to travel to Dracula's castle in Transylvania to do business. Count Dracula falls in love with Mina who is Jonathan's girlfriend and he decides to travel to London to find her...
The previous days to the performance we were learning some of the vocabulary and songs in class.
The play is funny and humorous and they also sing songs! At the end of the play, some of the students had the opportunity to ask questions to the actors to practise our English.

This activity is a fantastic opportunity for students to practise their English and we are very lucky to have an English theatre company with native English actors in our school. 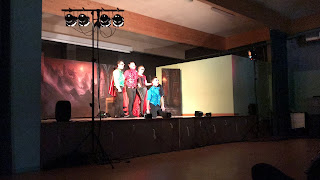